It’s common to hear engineers muttering “cryptography is scary” or “oh no its a cert problem.”

The topic is a dense one full of maths, mailing lists, and vulnerabilities which quite literally shock the world. It’s understandable how a lot of engineers put learning about the topics to another day.

In my career I have been asked to build two different certificate signing backends for IoT purposes. These tasks provided the opportunity to work with authentication, encryption, and cryptography at a lower level then typical.

This post will outline the bare minimum engineers should understand before working with authentication and encryption systems.

This section will provide a gentle introduction to authentication and encryption. These topics are to be read as a conceptual overview and not as literal implementation details.

Cryptography can lend itself to many utilities but as software developers our usage centers around authentication and encryption.

Encryption is the act of concealing communications from unintended audiences. When a communication is encrypted it is guaranteed to be viewable only by the intended party.

Authentication and encryption are used together to device a notion of trust in our applications and on the internet.

Cryptographically signing a message proves authentication in a single direction. It works like so:

The various ways to securely transfer the sender’s key to the receiver will be covered a bit later in the post.

While similar in procedure, cryptographic encryption serves a separate purpose. It works like so:

In the above scenario the key is being utilized on every message to encrypt the message and conceal its contents.

Several widely used technologies apply signing and encryption in practice. We will cover the following:

Private key infrastructure, or PKI for short, is a grouping of technologies, protocols, and policies. This grouping can be used in tandem to ensure both authentication and encryption and securely transfer keys between parties.

aside: PKI infrastructure will typically use RSA public and private keys. We dig into this more later in the post.

In our examples above the sender would sign a message with its private key, make its public key available to the receiver, and the receiver would verify the message utilizing the sender’s public key.

PKI is called an ‘infrastructure’ because it provides a trust policy in addition to authentication and encryption.

In PKI the trust policy takes the form of a tree. At the root of the tree is the “root CA”, where CA is short for certificate authority. The root can create one or more “intermediate CA(s)” by creating and signing their certificate with its own private key, providing authenticity that the intermediate CA was created by the root. This creates a chain of trust as I can confirm an intermediate is signed by its root by obtaining the root’s public key and verifying the certificate’s signature.

A diagram can help provide a visual aide. 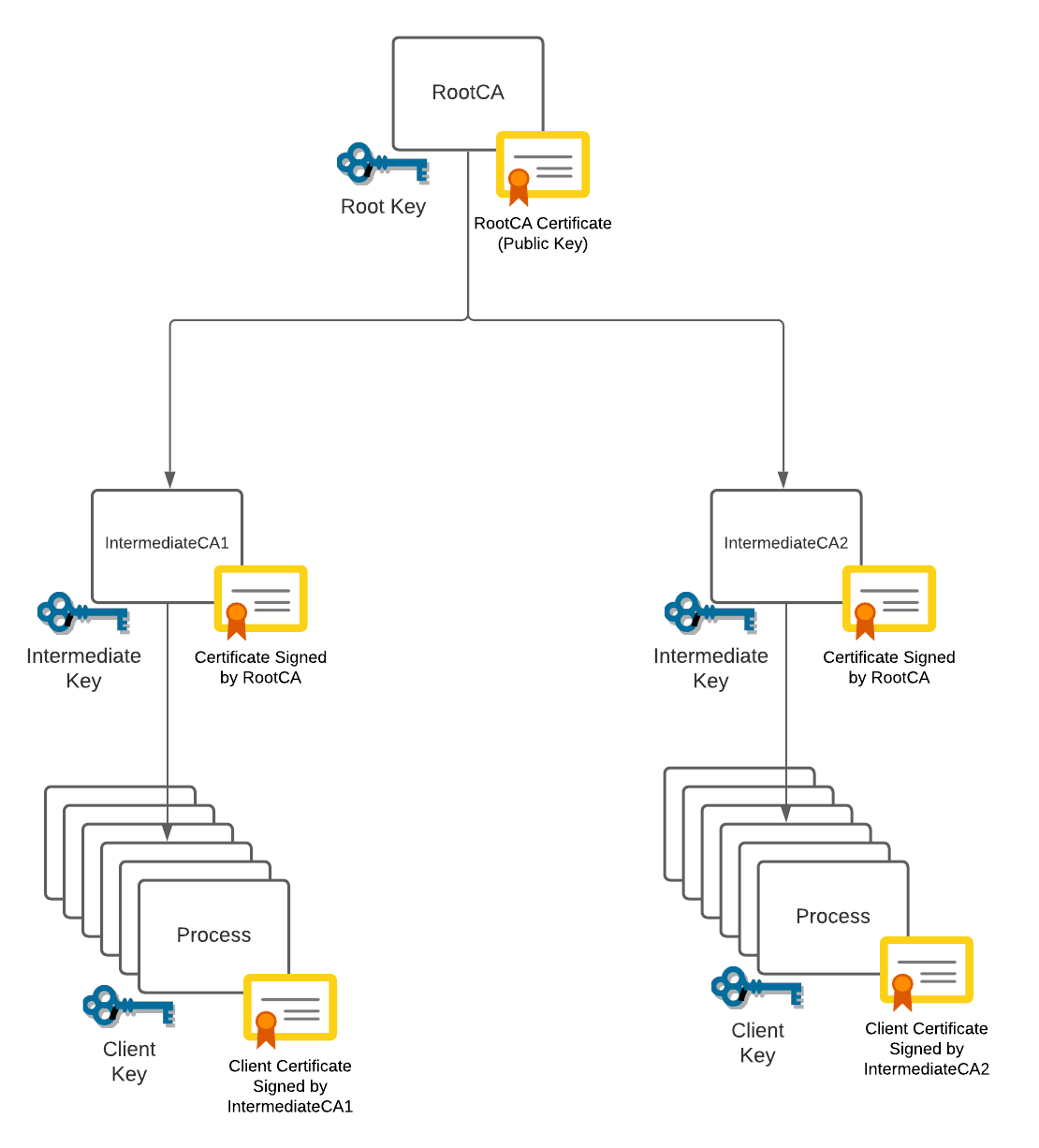 Each node in the chain has both a private key and a certificate.

A certificate is an envelope containing metadata and the public key of the owner. It may be used as follows:

It is worthwhile to take a pragmatic look at setting up a root CA, intermediate, and signing client certificates. A wonderful tutorial can be found here

TLS utilizes PKI to implement encryption over HTTP also known as “HTTPS”. TLS guarantees that every bit of data between two HTTP clients is encrypted and unintelligible to any other parties which may route the traffic.

When a browser connects to an HTTPS website a handshake occurs. Within this handshake the server’s certificate is verified and a set of symmetric keys are crafted. All communication on this secure channel is now encrypted and decrypted with the symmetric keys.

Each https server is assigned a client certificate. From our PKI diagram, client certificates are the leafs. When a user requests information from a server, the user’s browser will check the server’s certificate. If the browser cannot prove the certificate was created by a trusted root or intermediate CA the connection will fail.

aside: if you ever had to install a certificate bundle to a server because ssl was failing you are installing a well known set of trusted root and intermediate certificates. This is used in the above verification process.

With TLS comes maintenance. TLS certificates expire over time and must be kept up to date. Traditionally a server TLS certificate would be purchased from a well known root CA such as DigiTrust. Today, “let’s encrypt” has paved the way for free certificates, albeit these certs expire much sooner then ones you can purchase from a trusted root ca.

JSON Web Tokens or JWT for short has become a popular form of authentication in modern web applications. When coupled with JSON Web Encryption both authentication and encryption can be utilized.

The ubiquity of JWT and JSE is due to it’s simplicity and ease of use. Both specifications use JSON to transfer a signed and optionally encrypted token between parties.

This token can optionally contain claims, key/value information potentially useful for the receiving party along with several other “sections” which are base64 encoded and signed. The full details of generating a token can be viewed here.

The flow of jwt interaction follows:

JWT alone provides no key transfer facilities and the token’s data is in plain text. However, with JSON Web Encryption (JWE) it becomes possible to piggyback off PKI and retrieve public keys via the public key infrastructure.

More than a high level overview is further then this post would like to go. If you are interested in further details on JWT and JWE I suggest checking out the JWT RFC and JWE RFC directly.

Understanding this post will lend itself to utilizing JWT and JWE without much difficulty, as their components build on the fundamentals.

The following topics will describe the ubiquitous encoding formats encountered in modern authentication and encryption applications.

It All Starts With ASN.1

ASN.1 is a language for describing encodings.

A user of ASN.1 can write out ASN.1 data types.

A consumer of ASN.1 definitions program how these objects will serialize to disk or a network wire. This is referred to as an “encoding” of ASN.1 types.

For example an ASN.1 definition may describe a data structure comprised of two integer fields, an array of integers field, and a string field in a similar fashion as a structure in Go.

ASN.1 is heavily used in the telecommunication industry and remains popular due to its extensibility.

DER specifies a set of rules for encoding ASN.1 objects into binary.

Any objects described in ASN.1 can be encoded into DER and serialized as binary.

Libraries will often return DER encoded keys and certificates when crafting cryptographic primitives. It can be convenient for applications to work with DER as any penalty for marshalling/unmarshalling the binary to ASCII is not present.

PEM is simply the base64 encoded DER data surrounded by a block of ASCII text. Since DER can encode several ASN.1 formats and PEM simply holds a base64 representation of this data, PEM can hold multiple ASN.1 described formats transitively.

PEM is the encoding public keys, private keys, and certificates are typically transported in, as they are human readable and can be instantly recognized.

Because the base64 value can be several ASN.1 descriptions the PEM encoding wraps the base64 data with some header information. This is helpful for libraries which parse and decode these files.

PKCS8 and PKIX are formats specifically utilized for encoding a private key and a public key respectively. The former is part of a larger set of PKCS protocols defined by the RSA organization. The latter is defined by the Public Key Infrastructure working in rfc-5280 section4.1:

Both these formats are expressed in ASN.1 notation, therefore they can be DER encoded and subsequently PEM encoded.

These formats support password protection utilizing symmetric keys where both DER and PEM do not.

RSA keys are often used with x.509 certificates. As a reminder certificates are used to prove authenticity.

The certificate has a public key and enough information to prove this key is from who the receiver thinks it is.

A certificate is yet another ASN.1 described object defined in the rfc-5280 and can be marshalled to DER and PEM just like the others.

The above uses “/dev/random” as a random seed source and creates a 4096 bit key pair.

The public key can be extracted from the private.

Both private and public variables hold a language specific key object with fields specific to the RSA algorithm.

We want to transport the public key, both PKCS1 and PKIX are formats that can accomplish this. Since we covered PKIX in this post lets use that format.

This marshal function will take the language specific public key object, marshall it into the ASN.1 PKIX description, and then encode this ASN.1 description into binary. The der variable holds a byte slice containing the DER encoding of the private key.

If the goal is to simply store a public key in a database the binary DER encoding fulfills this use case. However, if the key must transit a transport that is not byte safe such as a network or email system we must PEM encoded the byte slice.

In order to PEM encode our DER encoded PKIX public key we need to create a PEM block.

The structure defines a few fields.

Type is ASCII text which defines the binary data being encoded. For a PKIX public key this should be “PUBLIC KEY”.

Headers allow for further details about the binary we are encoding, we will not use this.

Finally the Bytes field contains the binary data we are going to base64 encode into ASCII. Remember a PEM is simply the base64 encoded binary data with some ASCII type and header information heading and footing the results.

The above defines the block and encodes our binary PKIX key into an ASCII PEM format.

At this point we can print the pem encoded key and see a familiar sight.

A novice’s view of cryptography is clouded by unfamiliar terminology and acronyms. This often leads to engineers avoiding the subject all together.

This post makes it apparent that working with cryptography in a pragmatic sense has parallels with json or protobuf. At the end of the day, we describe a machine agnostic definition of an object (ASN.1), specify a way to encode this description (DER), and optionally modify the binary encoding to be network and email friendly (PEM).

With this new perspective tasks dealing with certificates, ssl, authentication, and encryption should be demystified enough to tackle.

Read other posts
← Flashing QMK Firmware With The Help Of Docker Optimizing PGX Allocations in Golang with Pprof. →